Contrasts-Tokyo Walks piece is s sonic walk – a novel type of composition based environmental sounds recorded in several locations and at different times of day during exploratory walks in the center of Tokyo. The piece is composed by placing the sounds on an online map at the approximate locations where they were recorded, using the Sonicwalks Software provided by Furukawa Labs of the Tokyo University of the Arts. The listener is invited to experience the piece by navigating through these locations using the software on a mobile device, either in by actually going to these locations in real space tracked by the gps of the mobile device, or by navigating through the map using the mobile device itself. Rather than decorating the experience of a space through ornamental musical sounds, the piece aims to intensify that experience through sounds recorded at timepoints during the day selected purposely to intensify the characteristic ambience of each location. The inherent musical potential of these sounds becomes apparent as the listener navigates between the locations paying attention to their different sonic profiles. The experience of differences and contrasts between sounds which are easily overlooked when walking through an urban environment becomes magnified when listening to recorded sounds which constitute snapshots of characteristic moments and have a prominent spectral or structural sonic profile. In this sense the piece is more of a framework for exploration and improvisation than a fixed conventional composition.

The sound material was collected in Tokyo using an ambisonic recording device (Zoom HR3-VR). The main idea of the piece is to convey the effect of the clash between artificial human generated sounds (cars, traffic, humans in indoor social spaces, various machines, bells) and nature generated sounds (birds, insects, wind, rain) within the urban enviroment of Tokyo. The piece aims to convey the atmosphere generated by the clash between the different categories of sounds, and also the sense to an imaginary listening subject (listener). Bernie Krause’s concepts of geophony-biophony-antrhopophony in the context of acoustic ecology provide a main impulse for the composition.

The main locations featured in the current version of the piece are at the itinerary of a walk starting between Hakusan and Koishikawa, north of the Imperial Palace and along the walls of the University of Tokyo Campus in Hongo, (Yayoi Gate), and then along the banks of the lotus pond of Ueno Park (Shinobazu no Ike), and in front of the Buddhist Temple of Benten (Benten Do, dedicated to Benzaiten, a deity originating from the Hindu goddes Saraswati, worshiped as the personification of wisdom and protector of Music, Art and learning). Characteristic sounds are those of various kinds of crickets encountered along the wall and in the pathways of the pond, contrasting with the sounds of cars and bicicles, traffic light signals, passers by and joggers. (See attached map). 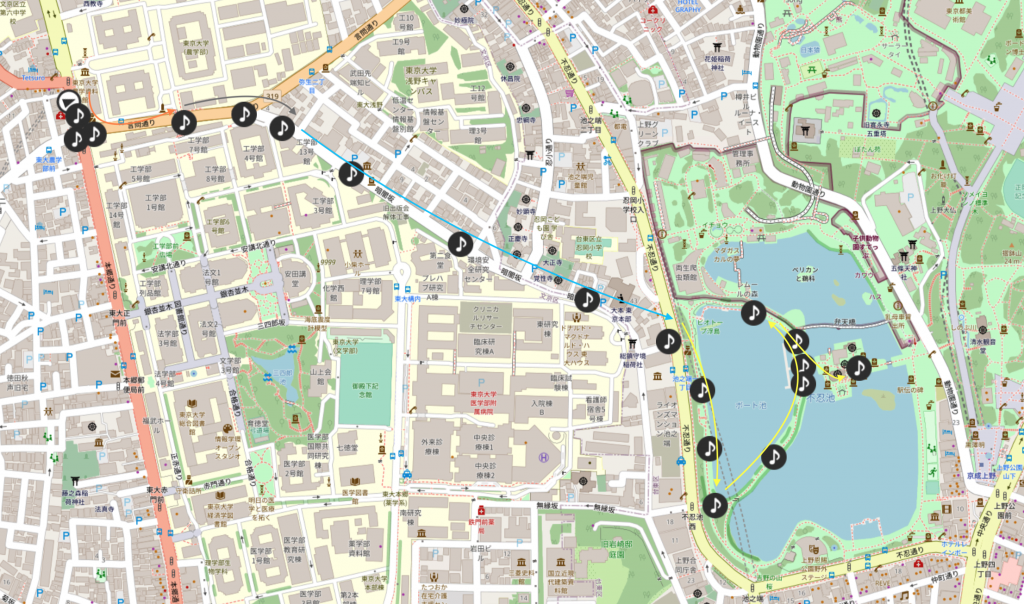